Lessons From A Terrific Book--The Alchemist 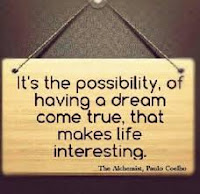 The Alchemist is a novel by Brazilian author Paulo Coelho first published in 1988. Originally written in Portuguese, it has been translated into at least 67 languages as of October 2009. An allegorical novel, The Alchemist follows a young Andalusian shepherd named Santiago in his journey to Egypt, after having a recurring dream of finding treasure there. The book is an international bestseller. It has sold more than 65 million copies in 56 different languages, becoming one of the best-selling books in history and setting the Guinness World Record for most translated book by a living author. It is recommended by Will Smith, Julia Roberts, Bill Clinton, Oprah, and many others. 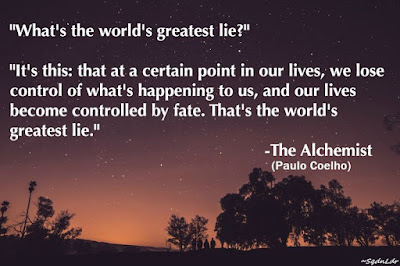 --Adapted from primility.com by Jerod Morris

Elderly Advice---Go For Your Dreams 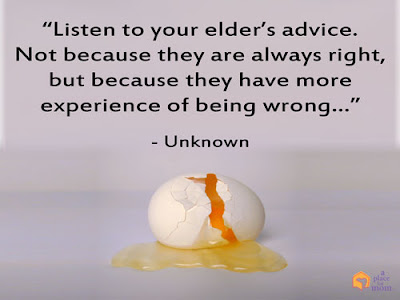 A recurring theme from elderly people in their last years of life was to follow your dreams. Studies have shown that older people who tried to achieve their dreams were happier with their lives.

None of us will ever achieve all of our dreams. If we do, we will just make up new ones! If we go for it, we can at least say at the end, "I tried!" instead of, "Why didn't I at least try?"

A Culture Of Maximum Effort 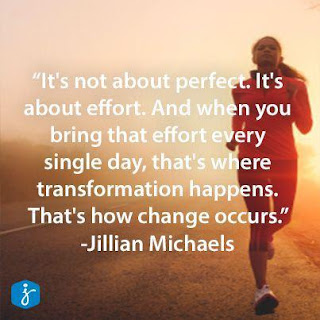 I got a call from a coach from a neighboring county who wanted to come visit to discuss how I got my players to play so hard. I had never met the coach but he had watched our team play and had heard from other coaches how hard our teams played. According to him, I have a reputation of getting young people to play harder than a lot of other teams. I’m not completely sure it’s justified because there are several times during every season when I don’t think my team is giving everything they have. But I agreed to meet with the coach. He came in with a list of prepared questions such as are there any specific drills that we do, do we punish our team more than others or how many sprints do we make our players run. He was searching for the one thing that would make his players work harder.

Throughout the conversation I explained that I didn’t think there was any one thing we did. I believe that young people have to see themselves as being part of something bigger than themselves. A part of a community and the culture of that community should be maximum effort in all things. The atmosphere that we continually try to create is one of not “making” players do something but having them do something because they want to.We try to create this culture of maximum effort in all things not just specific drills. Simply using the words, “maximum effort” signals to a player that we are not pleased with the effort being produced. We also continually point out when effort is unacceptable and not up to our program’s standards. When our players hear “maximum effort” or “that is unacceptable” then they know their effort is not up to par.

It’s important that this culture extends beyond the court or playing field and into the classroom and at home.We hope that before long maximum effort will become a way of life and not just something that takes place in a certain drill. I don’t know if I answered the coach’s questions but I hope he felt the visit was worth his time.

A Story About Judging Others 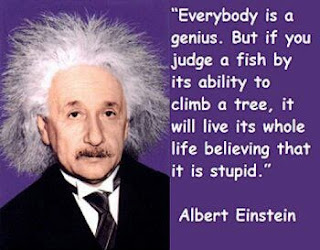 A young couple moved into a new neighborhood. The next morning while they were eating breakfast, the young woman saw her neighbor hanging the washing outside.

“That laundry is not very clean; she doesn’t know how to wash correctly. Perhaps she needs better laundry soap.” Her husband looked on, remaining silent. Every time her neighbor hung her washing out to dry, the young woman made the same comments.

A month later, the woman was surprised to see a nice clean wash on the line and said to her husband, “Look, she’s finally learned how to wash correctly. I wonder who taught her this?”

The husband replied, “I got up early this morning and cleaned our windows.” 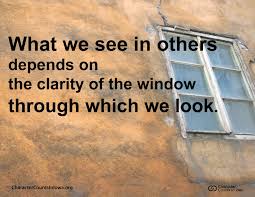 And so it is with life. What we see when watching others depends on the clarity of the window through which we look. So don’t be too quick to judge others, especially if your perspective of life is clouded by anger, jealousy, negativity or unfulfilled desires. 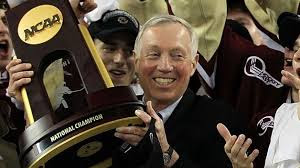 Jerry York has been in the driver's seat for a number of great college hockey teams. Even after making history after winning his 1000th match, his focus was on keeping the vehicle moving forward.

The 70-year-old York, in his 44th season on the bench and 22nd at Boston College, is the first coach in NCAA Division I men's hockey to win 1,000 games.

"I've always been a front windshield type guy and I've always looked at what's next," York said. "I don't reflect back a lot ... otherwise I'd crash the car pretty quick."

York is no stranger to milestones. He has a 1,000-595-108 record since his career began in 1972 and has led his teams to five national championships -- one at Bowling Green and four at Boston College.

York is one of only three NCAA coaches to win a title at multiple schools and is the career leader in NCAA Tournament wins with 39.

In 2012, York secured his 925th career victory to pass Rob Mason and become the winningest coach in college hockey.

We are proud and honored to have Coach Jerry York as a subscriber! We have a great team of subscribers. Our subscribers realize that for less than most people’s monthly cable bill they can get an entire year of essential information delivered to them that make them better leaders, coaches and people. We believe it's no coincidence that our subscribers are some of the most successful people in the profession!


For more information about our subscription plans please visit The Leadership Publishing Team
No comments:

Look to the Present 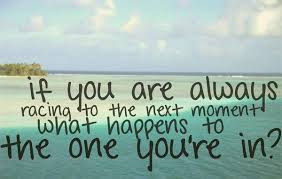 The great Western disease of "I will be happy when …" is sweeping the world. You know the symptoms. You start thinking: I will be happy when I get that … that promotion … that status … that money ...that win. The only way to cure the disease is to find happiness and meaning now.

When older folks who were in their last years of life where asked what advice they would give to younger people there was a theme that was present over and over--find meaning and be happy now! You may work for a wonderful company and believe that your contribution is very important. But when you are 95 and you look around your death bed, very few of your fellow employees will be waving goodbye! Your friends and family will probably be the only people who care.  Don't get so lost in pleasing the people who don't care that you neglect the people who do.