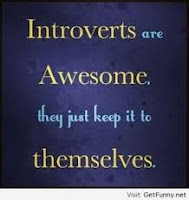 An introvert is not a shy, socially awkward, quiet being who doesn’t like people. They also aren’t people striving to fit in with an extroverted world. Introverts are over-sensitive to dopamine. If around crowds of people for too long, they feel drained. It takes them being alone with their thoughts or crafts to re-energize themselves.

Extroverts are the opposite, in that they don’t get enough dopamine, and feel energized when they are around crowds of people. They thrive around crowds because they feel drained when they are by themselves. An introvert isn’t necessarily a shy person; they just would rather interact in one on one situation. They don’t waste their time around people putting on acts for a crowd, because they don’t feel the need to do that in social settings. If they are comfortable being in one on one situation, then they want to meet people of substance and value rather than someone who will put on a show for them. It’s in their nature to be aware of these things because it is a huge part of how they function.

So how does this affect the sports world? With personalities like Dwight Howard, Shaq, Chad Ocho Cinco, and other outgoing athletes, it’s easy to overlook the fact that introverted athletes do exists, and are among the elite. Kobe Bryant, Michael Jordan, Reggie Miller, Jerry West, Larry Bird, are all introverted athletes who undoubtedly contributed an immeasurable amount of value to their sport. Although it was a little easier for them to be introverts because of dominance in their sport, even they often got a bad rap for their relationships with the media and or fans. The smooth talking athlete is admired more because of their good relations and ability to connect with the media and their fans.

The perfect example of this manifested in the late eighties where an introverted basketball player by the name of Larry Bird was pitted against a smooth talking showman extrovert by the name of Magic Johnson. Their rivalry was pitted with societal labels such as “black against white” “big city party guy against small town farmer boy”. Reality was, this was a classic showdown of “introvert vs extrovert” The media valued Magic Johnson’s easiness and sense of humor over Bird a man of few words.

Kobe Bryant is seen as a cocky jerk. He gives his professional and honest opinion when answering questions on his profession.Michael Jordan is also often seen as rude when it comes to his relationship with the media. He doesn’t spend too much time occupying our television sets with being on shows, interviews, or even a ton of commercials. Ever since retirement, he’s done pretty well with staying out the public eye.

Athletes with this type of introversion offer a unique dynamic to their sport. They are incredibly focused individuals. They don’t wait for anybody to work on their game, they can go shoot or workout by themselves. Do you think Jerry West skipped out on going to the gym because none of his friends wanted to join him? Larry Bird spent hours in the gym alone with their thoughts, a hoop, and a basketball. The sounds of “swishes” echoed the gym, rather than chatter from others.

If you’re a coach and you have an introvert(s) on your team, support them. It may seem like they don’t fit in, or don’t like their teammates. That’s far from the truth. Rather than pressure them to constantly engage in the group setting, take the opportunity to help them get to the next level as an athlete if that is what their desires are. They will put an immense amount of focus into that goal.

10 Athletes Who Are Definitely Introverts

Quiet: The Power of Introverts in a World That Can't Stop Talking